How can I get free of this stinking political and health fear-stuffed albatross?

Suppose this page is about you…and suppose you are wound up tighter than a drum by the tension of world wide and local politics and health. This page is your wayfinder.

THE PURPOSE OF THE BLOG AND ALL MY WRITING is to assist you the visitor to begin taking steps along a path toward discovering the regenerative existential cures to be freely found in plants, gardens and the landscape.

THE FIRST STEP is what could be called ‘nature prescriptions’–calibrated doses of time outside. Take a walk. But does the walk heal? What actually happens?  What is on the path that takes you on a journey? Where do landscape journeys take you?

And why even take that path and that journey?

A walk, a journey just for the landscape?–heh, I know what you are thinking–we all know what landscape is, right? Same old, same old, right?

flahertylandscape contends it is more–consider this:

The landscape can be a private cocoon to rest the restless.

On the walk you may weave dreams full of surprise and delight yielding true moments of repose.

It can be a journey to unwind, to regenerate, to reconnect with inner peace, to nest away from the daily hustle and bustle.

I have talked about, that is, written about portals…portals and plants.

What do I mean when I say portals? It is more about what words can not describe. What?

Perhaps you remember some TV shows, Twilight Zone, One Step Beyond…but this is about real life. That’s right, real life.

For centuries, dare I say, millennia, people, humans have spoken about, written and explored the indescribable relationships between plants and humans. Portals is my effort to continue that chain of communication.

This last week I had a birthday. I received from my dearest friend two books of illustrations by the Swiss, Ernst Kreidolf. Both images in this post are his work. He spent his lifetime addressing the communication relationship between people and plants.

Ernst used gnomes and elves to describe these indescribable relationships.

Let me share some of Ernst Kreidolf’s life story.

He was born over one hundred years ago in Switzerland. He was a classic artist, a pioneer of children’s illustration and picture books…and gnomes in the popular imagination! His magical illustrations have a timeless quality. To this day, his art is still very popular in Switzerland.

In 1920 Blumen Ritornelle (Flower Chorus), in 1922 Alpenblumenmaerchen (Alpine Flower Fairy-tales), in 1924 Ein Wintermaerchen (A Winter’s Fairy-tale), in 1926 Lenzgesind (Servants of the Spring), in 1928 Das Hundefest (The Dogs’ Party), in 1929 Bei den Gnomen und Elfen (With the Gnomes and Elves), in 1931 Grashupfer (The Grasshopper), in 1932 Aus versunk´nen Gärten (From the Sunken Gardens) and in 1935 Die Himmelreich-Wiese (The Kingdom of Heaven Meadow).

His illustrations carry us off to the world of fairytales and dreams, where plants play a leading role.

One cannot but wonder at his ability in both identifying the key characteristics of plants and giving humans a unique interaction with them.

His legacy endures as a tender ode to Mother Nature’s glory. The best illustrated web site with Kreidolf biography–a fantastic display of his water-color work.

And portals? His work was all about portals.

I think I can see the future.

Or, have I confused the forest with the trees?

Or, the trees with the forest?

…and root beer. I’m not eating or drinking them. I am seeing them in the forest. 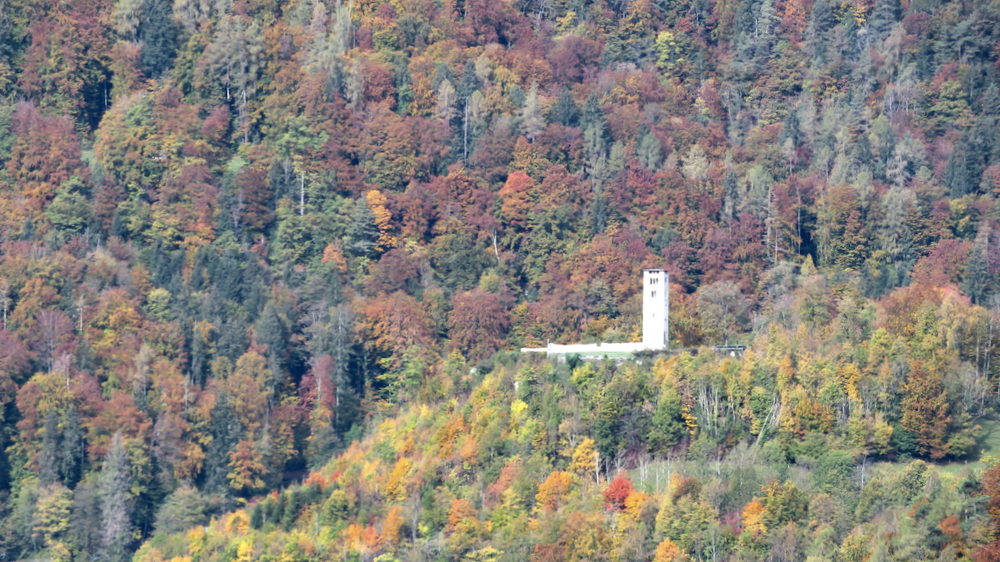 No sugar maples? Don’t need them.

I looked out the window today. Fall had snuck in, big time. Nearby a huge old linden tree was freely droping leaves. It made me think of snow flakes, large snow flakes drifting down on a day with no wind. 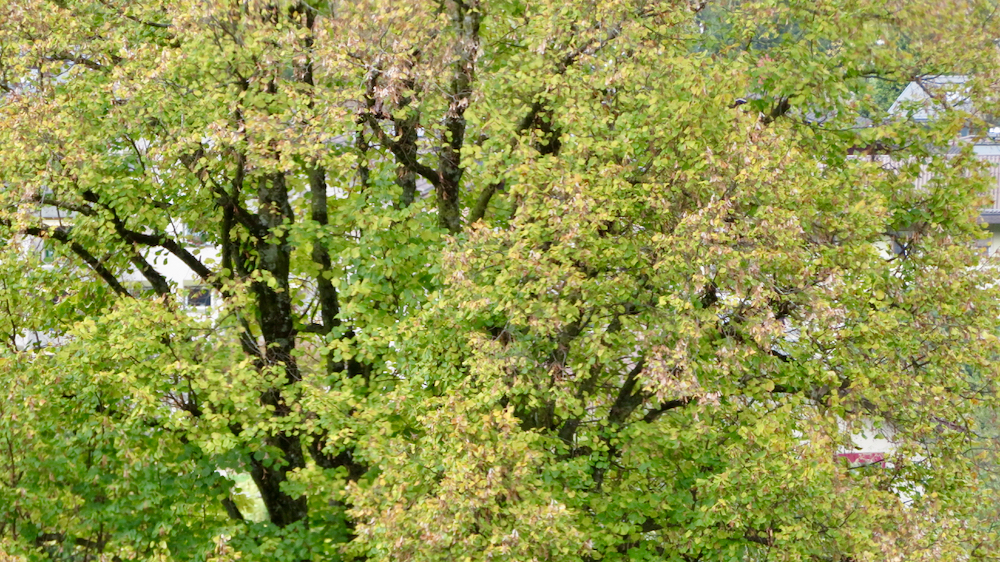 It was mid afternoon. There was still an autumnal warm sun. I had to take a walk. 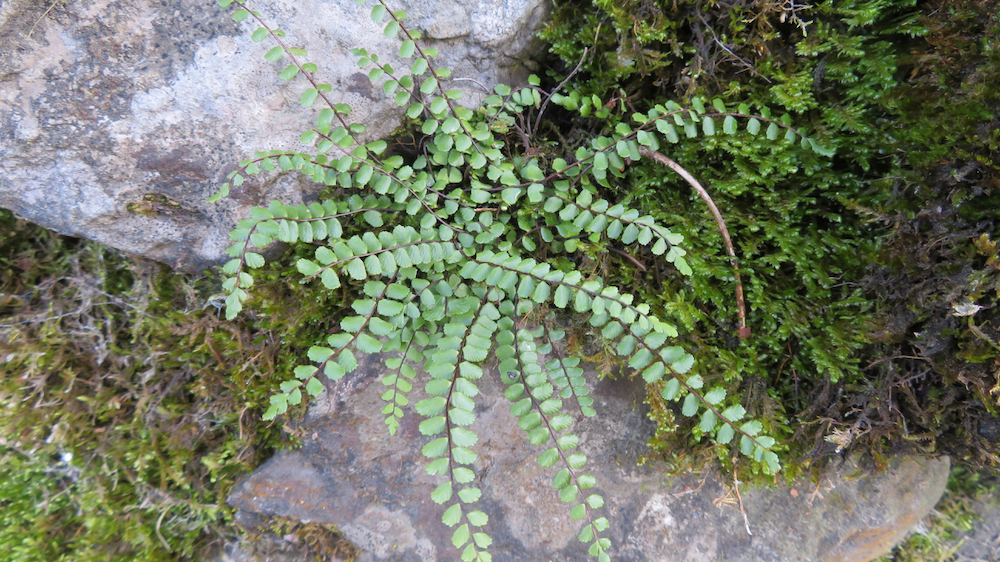 2.I wanted to take my peeps for a ride on the nearest lake; but along the way, I became distracted. This image made me think, if I was looking at a city, would I be looking at something as diverse as this? Then I thought green ferns and gray rocks. Such a pleasant combination. Then I headed to the lake. 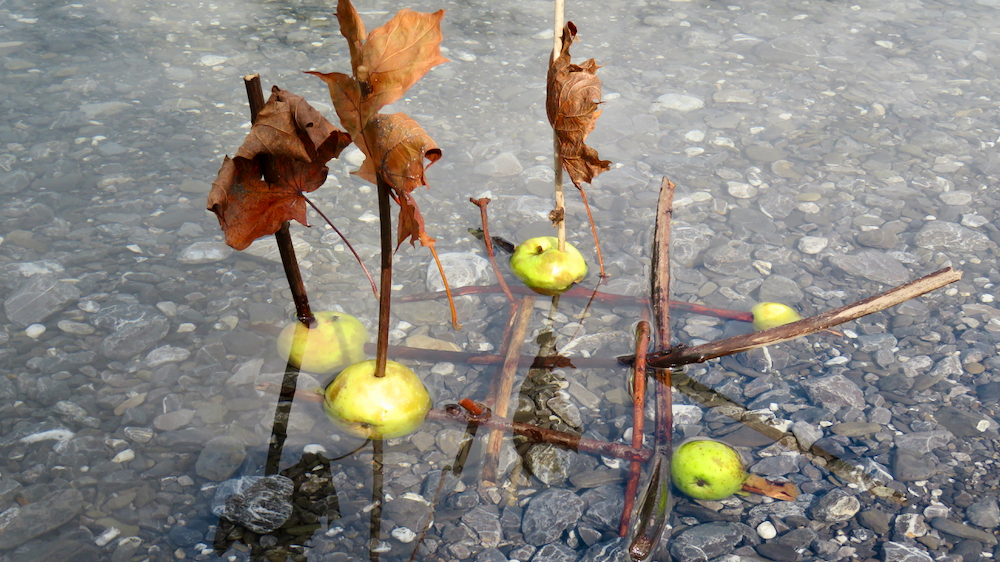 3.When I showed my peeps the boat, they said no way. Not sea worthy.

4.Then they pointed to the ship they wanted. I looked. Instead of the ship I saw the fall color in the backgroud forests.

5.I followed the forests along the lake edge until I saw this town. Then I thought, no need to go out on the lake. It would be more fun following paths in the forest. 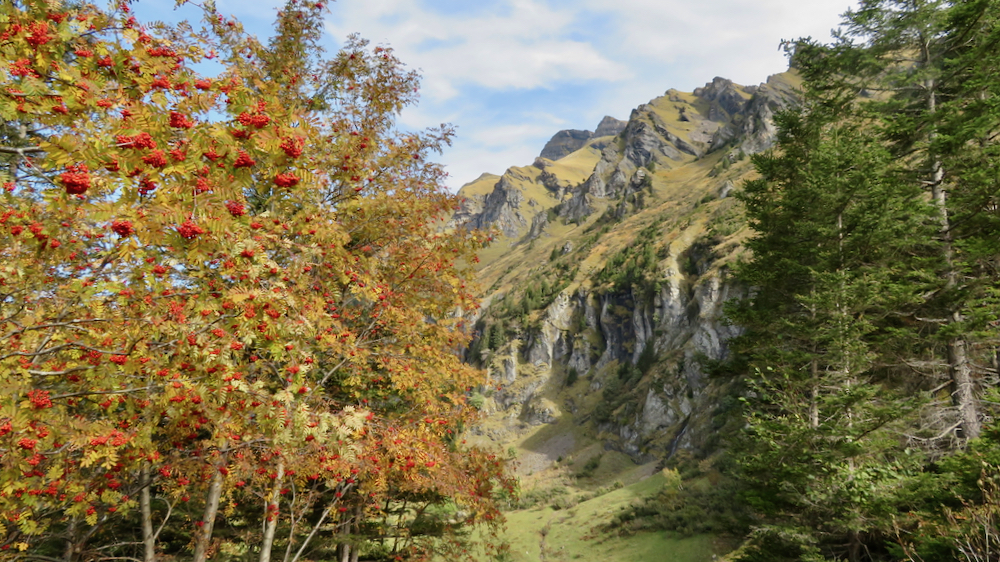 6.Ahhh, yes, this was my pleasure in the Lauterbrunnen Valley away from the tourist route.

7.And as usual for me, I had to look not only at the large forest landscape but also at those life forms that were sheltering under the forest canopy. And as I examined, I was unfortunately forced to ask if this was a diverse village. Upon closer inspection…one bite makes you larger and another makes you small…

It was time for me to get back home for dinner.

When waiting to pick up the take-out, what is the safe social distance? 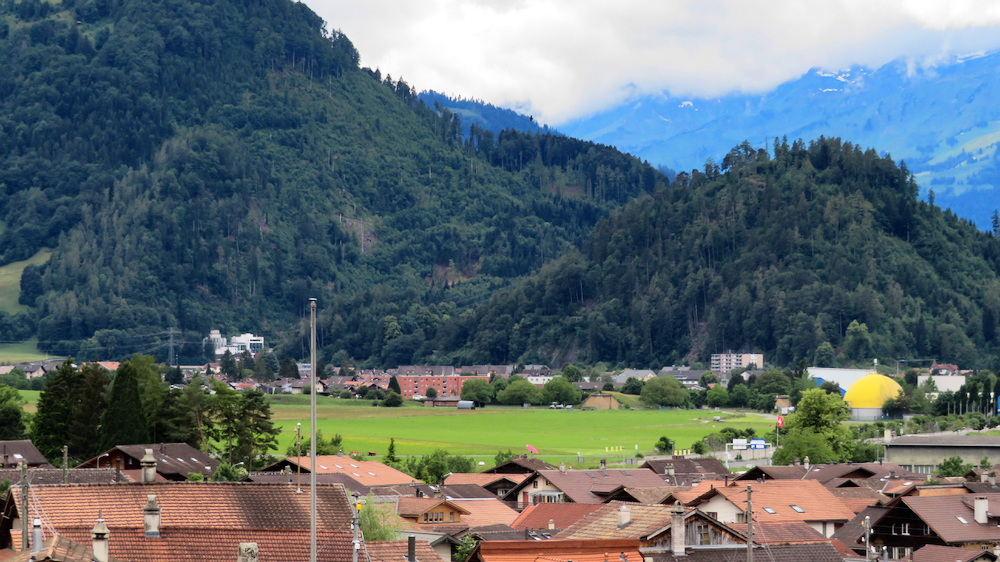 In this landscape you find dense forests on steep slopes meeting flatlands filled with agriculture.

This kestral, safely isolated near the top of a dead tree at the edge of a flat agricultural field, waits patiently for its take-out.…until I kept walking and broke into its 100 meter safe zone.

…dream or old school or sustainable? 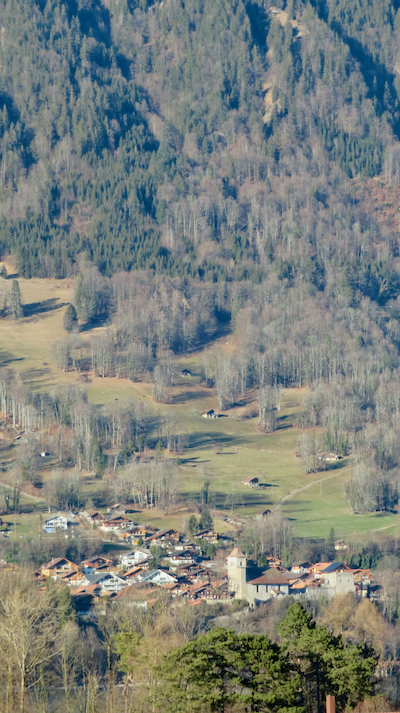 From the forest to the town. 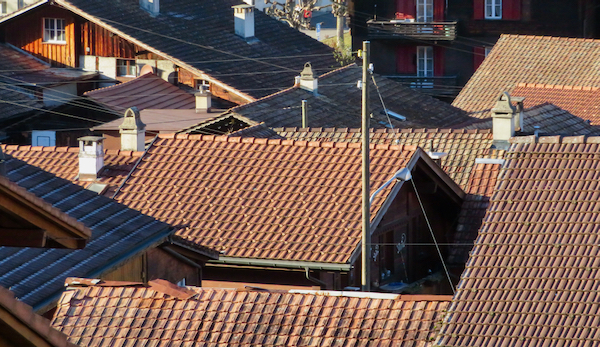 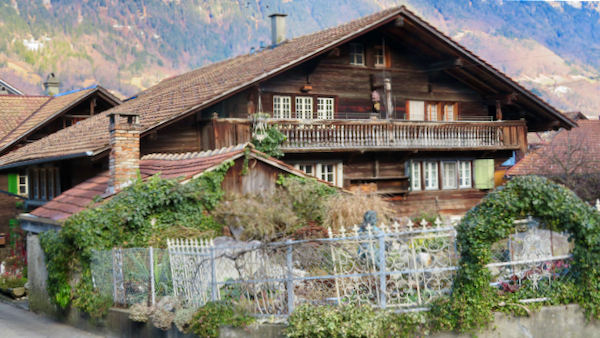 Neighbors in the duplex make the shared balconies their own. Note finishing details–they are rough but they stand the test of time. Century? Two centuries? Older? 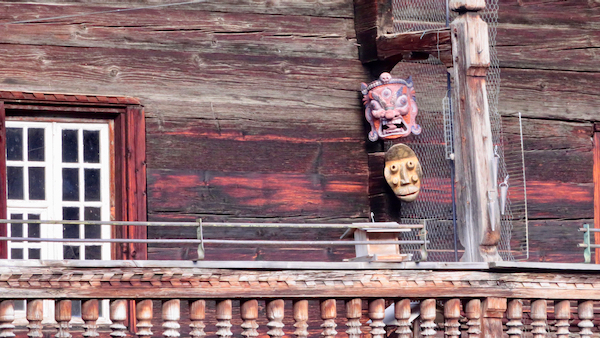 Not everyone keeps them in museum quality. It is expensive; and believe it or not, it is not in compliance with current energy standards. And how much to upgrade in order to meet those standards?

Here is a collection of images I have taken of plants and landscapes the past days as winter descends and the first frost arrives.

Winter descends. Previously we had snow only 2000 meters elevation and above. Last night, I fell asleep listening to the slow and peaceful pitter patter of rain falling softly on the roof. I woke up this morning to find the snow had snuck down to 700 meters elevation.

After this tree’s branches and trunk have built barns, built and heated homes, the remnants have become the nourishment for how many other living entities? Everything gets eaten in the end.

Frost bite, frost burn, yet there is some beauty in this image. Is there a lesson to be learned?

The frost is not the end but a tell that the end is near. In the background, the babbling brook runs away from that truth.

Woke up this morning and winter had snuck in. Winter! And I had not yet even finished the requisite autumnal post.

Snow down to 3,000 meters. Above image shows in the foreground two valleys at 600 meters. The valleys drain the north side of the Jungfrau Massif, part of the Berner Oberland in the Swiss Alps. If you magnify, you can see Jungfrau, Monch and Eiger in the left center background.

If I could…and then the fairy appeared before me. Yeah, in my dreams! 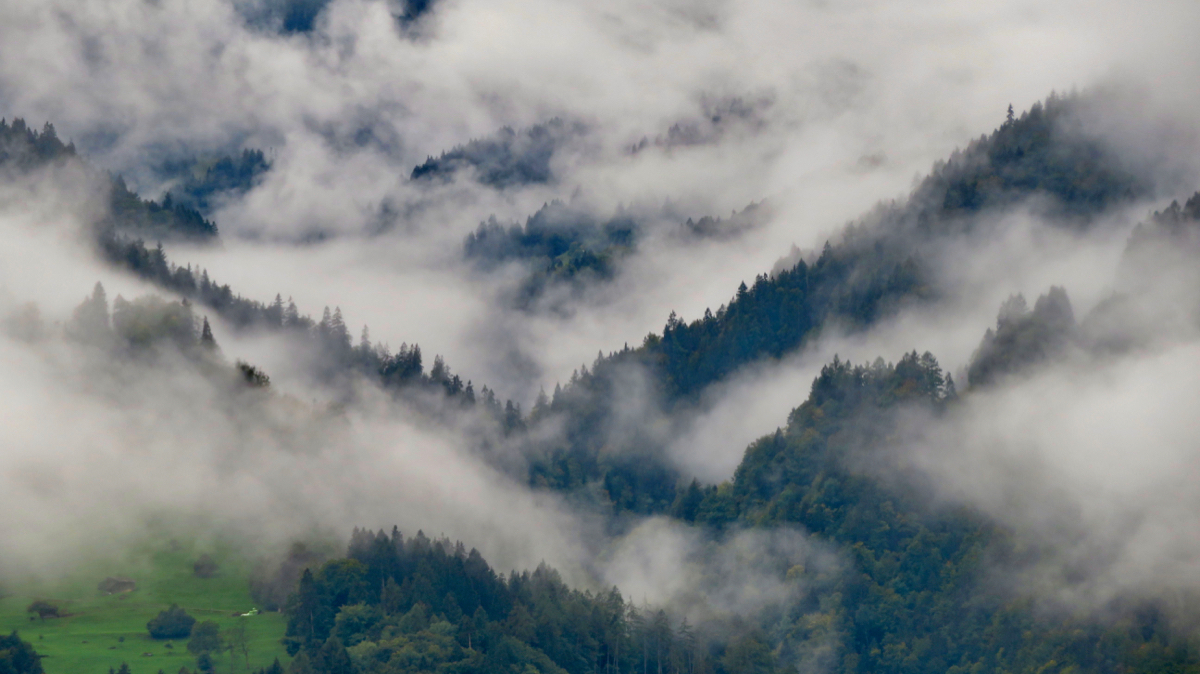 If I could write with the emotion and mystery of these clouds moving ever so slowly but always with magnificent beauty, incredible balance.

From Where I Stand...