I have talked about, that is, written about portals…portals and plants.

What do I mean when I say portals? It is more about what words can not describe. What?

Perhaps you remember some TV shows, Twilight Zone, One Step Beyond…but this is about real life. That’s right, real life.

For centuries, dare I say, millennia, people, humans have spoken about, written and explored the indescribable relationships between plants and humans. Portals is my effort to continue that chain of communication. 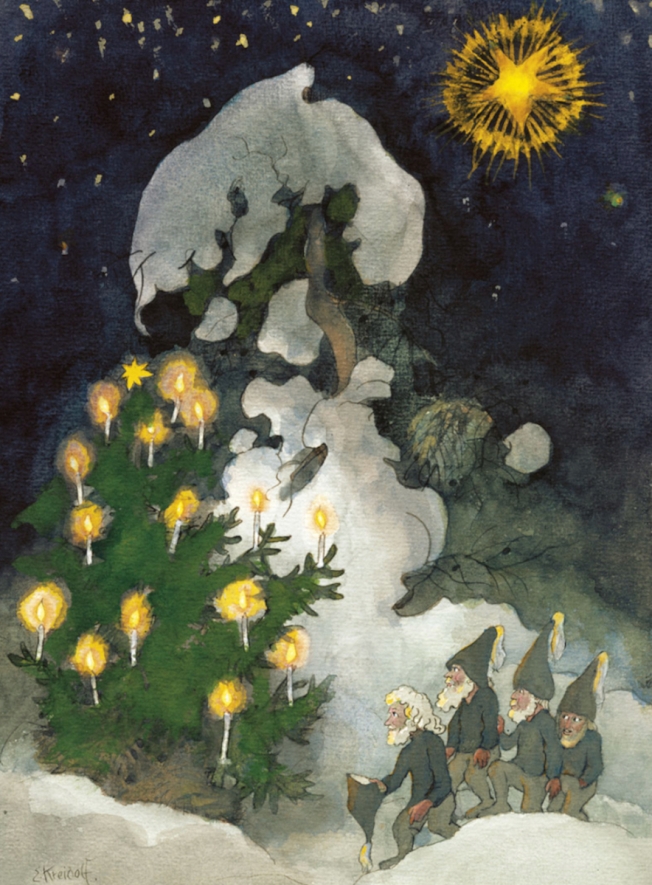 This last week I had a birthday. I received from my dearest friend two books of illustrations by the Swiss, Ernst Kreidolf. Both images in this post are his work. He spent his lifetime addressing the communication relationship between people and plants.

Ernst used gnomes and elves to describe these indescribable relationships.

Let me share some of Ernst Kreidolf’s life story.

He was born over one hundred years ago in Switzerland. He was a classic artist, a pioneer of children’s illustration and picture books…and gnomes in the popular imagination! His magical illustrations have a timeless quality. To this day, his art is still very popular in Switzerland.

In 1920 Blumen Ritornelle (Flower Chorus), in 1922 Alpenblumenmaerchen (Alpine Flower Fairy-tales), in 1924 Ein Wintermaerchen (A Winter’s Fairy-tale), in 1926 Lenzgesind (Servants of the Spring), in 1928 Das Hundefest (The Dogs’ Party), in 1929 Bei den Gnomen und Elfen (With the Gnomes and Elves), in 1931 Grashupfer (The Grasshopper), in 1932 Aus versunk´nen Gärten (From the Sunken Gardens) and in 1935 Die Himmelreich-Wiese (The Kingdom of Heaven Meadow).

His illustrations carry us off to the world of fairytales and dreams, where plants play a leading role.

One cannot but wonder at his ability in both identifying the key characteristics of plants and giving humans a unique interaction with them.

His legacy endures as a tender ode to Mother Nature’s glory. The best illustrated web site with Kreidolf biography–a fantastic display of his water-color work.

And portals? His work was all about portals.